Thank you for visiting the website of the Seattle Area Real Estate Team, your online source for information on buying or selling real estate in Seattle. Our site offers you a detailed and complete search of all listed properties to help you quickly find the best Seattle homes for sale.   We know and service the entire Seattle area real estate market and surrounding metro areas around Bellevue, Tacoma and Everett and all areas in between.

Our goal is to provide you with professional, knowledgeable and dedicated representation with a focus on your desires and goals while making our association one that you will keep for life.   If you are interested in buying or selling property around Seattle let a member of our team of talented and professional real estate brokers meet with you to discuss your needs and goals and assist you with your next move. 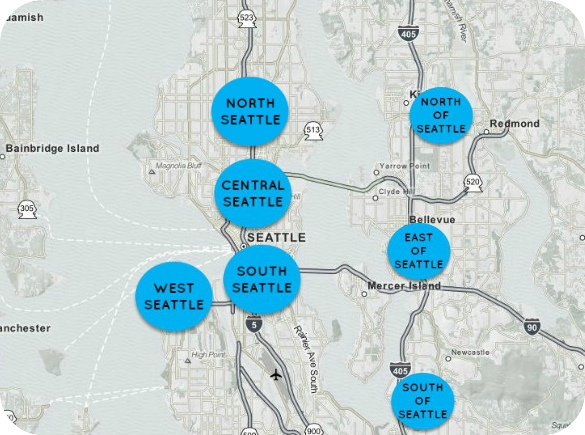 2022 was a unique year in real estate in the Puget Sound region with a strong transition from the start to finish of the year. 2022 started much similarly to 2021 with low interest rates, low inventory and properties selling quickly and frequently above the listed price.  As the year progressed and interest rates began to rise the market started to slow in pace of sales and the increase in median sales prices.  By July and August of 2022 we saw the first month over month decline in median sales prices in a long time.  While the median sales prices were still up over the same month the prior year prices appear to have hit a temporary peak in the spring of 2022.

Although price growth stalled due to the combination of substantially higher interest rates coupled with growing inventory the market overall has positioned itself to be more balanced between buyers and sellers and “healthier”.  Inventory levels have risen from less than half a month in 2022 to near 2 months in 2023. With a balanced market considered to be 2-4 months of inventory this shift has already enabled buyers to have more options and opportunities than in previous years, the return of typical contingencies to transactions and the decrease and disappearance of multiple offers pushing sales prices 5-20% above their list prices.  While the market is no longer moving as swiftly as it was it has gone from an overheated market to a healthier one that will still be good for both parties to a transaction.

The NWMLS report for December showed continued growth in the number of active listings compared to the same month a year ago, but drops in the number of pending and closed sales. December prices for single family homes and condominiums that sold across the 26 counties in the report dropped 0.51% from twelve months ago, marking the first year-over-year price decline since March 2012.

Brokers added 2,980 new listings to the inventory last month. That total was 1,637 fewer than the number added during December 2021 (4,617). Sellers accepted 4,017 offers from buyers, down about 31% from the year-ago volume of pending sales (5,850). At month-end, buyers could choose from 9,475 active listings, nearly three times as many as a year ago when only 3,240 homes and condos were offered for sale area-wide.

The Northwest MLS report shows about 2.1 months of inventory at the end of December, making the fourth consecutive month with at least eight weeks of supply. Six counties, including King, Kitsap, and Snohomish, still have less than two months of supply and Pierce County is slightly over two months. A balanced market is considered four months of inventory so despite the improvement in supply the Seattle metro area has not flipped to a “buyers market” based upon the evaluation of supply/demand.

As we enter the start of 2023, the market is continuing to experience a shortage of homes for sale in the more affordable and mid-price ranges. With the winter cleanup of unsold inventory complete, and a low level of new listings coming on the market in January and February, the availability of homes for sale is at a low point that will change as we head towards spring when there is likely to be an uptick in new listings for several months before slowing again in the summer.

Mortgage rates are expected to continue to fall from current levels and the highs of summer 2022.  Sale prices should start increasing again in the second half of the year. With lower interest rates expected and inflationary pressures easing, a strong local job market and a large demographic group of Millennial renters looking to buy will provide support to drive the purchase market forward.  Whereas 2022 was a year of transition in the real estate market 2023 should bring stabilization, normalization and healthy growth throughout the year.

ABOUT THE SEATTLE AREA

The Seattle metropolitan area is made up of three counties - King which encompasses the city of Seattle and spreads eastward; Snohomish county to the north and Pierce to the south.  Puget Sound forms the western border of the Seattle area and stretches 100 miles north and south and connects to the Pacific Ocean via the Straits of Juan de Fuca.  The region was formed by ancient glaciers which carved out the many waterways that are spread throughout the area.  To the east of Puget Sound rises the Cascade range of mountains and Mt. Rainier, the tallest and most prominent of the mountain chain.  The Seattle area and Puget Sound was first explored by George Vancouver in 1792, who claimed it for Great Britain and named the sound after his Lieutenant - Peter Puget.  The first non-native American settlers in the area started a town in present day Tumwater with the Seattle area adding its first in 1852.  Seattle was the main travel and trade port with Alaska and the rest of the United States and grew around a shipbuilding industry in its early years.  The Tacoma area south of Seattle had a significant smelting industry where copper, gold and silver were processed.  In the world war years the Seattle area developed a number of heavy industries with the Boeing company building airplanes and a number of companies building ships around Seattle and Tacoma.  The Boeing company maintains a large presence throughout the Seattle area to this day with multiple facilities in and around Seattle.  In recent years the Seattle area has expanded its growth around the technology industry with Microsoft and Amazon leading that new era. The Seattle area is the most populous part of Washington state with an estimated population of over 3.7 million.